It is the Industrial Property right that protects inventions that are new, have an inventive step and are susceptible of industrial application. In practical terms, it grants its owner, in a certain jurisdiction and for limited period of time, the right to prevent third parties, without the owners consent, of producing, using, selling or importing the product protected by the patent or the product obtained directly by the patented process. On the other hand, the inventor is obligated the reveal in detail all the technical content of the invention protected by the patent.

In accordance with Art. 55 of the IPC (Industrial Property Code), patents are granted in relation to inventions that are new, contain an inventive step and industrial application. Excluded from patentability are inventions included in Art. 52 and Art. 53. Some of these limitations refer to human cloning processes, to the human body, to vegetable varietys or animal races and to the biological processes of obtaining them, the methods for treating or diagnosing applied to the human or animal body, discoveries, scientific theories, materials or substances founded in nature, aesthetic creations, information presentations, methods of game or business, as well as software and mathematical methods as such. These last limitations, if found in solutions that may be implemented by a computer, may be protected if the solutions comply with patentability requisites.

Novelty - the invention matter must be new, which means that it may not have been made available to the public by means of a written or oral description, by use, or in any other way, before the date of filing of the patent  application.

Industrial Application – the object of the invention can be made or used in any kind of industry, including agriculture.

National filing for protection of inventions

Provisional Patent Application (PPA) - Portuguese law allows for the filing of a patent by resorting to the filing of a Provisional Application that, at a date no later than 1 year, should be converted to a definitive application. This application was created to allow for the establishement of the priority date and to allow a rapid protection of inventions that are still under development and do not comply with all formal requirements that a regular application requires.

Schedule for a patent application

In order to exemplify the several steps involved in the filing of a National Patent Application before the Portuguese PTO, below you may find a flow chart, with the stages included in the application: 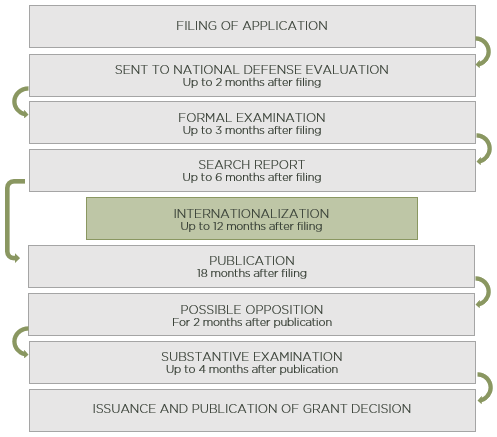 Routes for International protection of inventions

European Patent - Right conferred by the EPO (European Patent Office) that can be validated in 44 countries that are currently signatories of the European Patent Convention, or that have established extension/validation agreements with the EPO. Allows, by filing a single application before the EPO, to select upon its grant the jurisdictions in which you would like to protect your invention, allowing for a significant reduction in overall cost of protection.

The filing of a PCT Application allows for the decision that the owner would have to take at 12 months after filing concerning the jurisdictions in which to protect the invention may be postponed to 30/31 months. With this filing a Search Report is also performed and obtained from the EPO. After the deadline of 30/31 months, the application enters the national phase, which means that the applicant must choose where to protect his invention.

Which route to choose?

One of the first things to establish in a patent application is to chose the route of protection, according to the jurisdiction in which you want to secure your invention, to the resources available and the timeframes involved. Below you will find the most common patenting strategies: